I'm late to reporting this, but my Templeton-Cambridge colleague and leading scholar in the field of science and religion, Fraser Watts, writes that the International Society for Science and Religion announced the winners for its 2020 Book Prize in September. 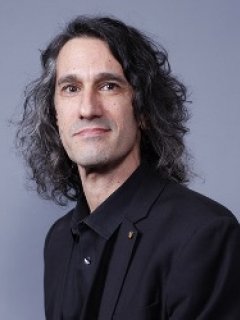 Agustin Fuentes. Image courtesy of Princeton University.
The book awarded the prize in the general public category this year was by Professor Agustin Fuentes, an anthropologist and primatologist at Princeton University. His award-winning book, published by Yale University Press, is Why We Believe: Evolution and the Human Way of Being.
"There has been a huge amount of interest recently in human distinctiveness, both in just how different humans are from other species, and, if we are different, what makes us different," said Watts. "Fuentes’ answer is that it is the predisposition to believe that makes humans what they are. He is concerned here, not with what views people hold in an abstract detached kind of way, nor specifically with religious beliefs, but with the more general predisposition for humans to become passionately committed to ideas. It is this tendency that is manifest in what we call ‘religion’, though it can find other outlets too. This tendency to form passionate commitments is one of the glories of human beings, but also sometimes one of their problems."

The prize for a book intended for professionals and communicators went to Christopher White, Professor of Religion at Vassar College in New York, Other Worlds: Spirituality and the Search for Invisible Dimensions, published by Harvard University Press. White brings together two contemporary preoccupations that, on the face of things, seem very different: physics and fantasy fiction. On the one hand people have become fascinated by physics and cosmology. The focus on hidden invisible dimensions has liberated us from the tyranny of common sense and encouraged us to believe in the possibility of worlds very different from what we see around us.
According to Watts, "White argues that has set writers free to create an extraordinary rich variety of enchanted worlds in fantasy fiction, from Flatland, by Eric A Abbott, in 1884, and continuing through the para-Christian fantasy writing of people such as J. R. R. Tolkien and C. S. Lewis. Physical science and fantasy fiction have come together to help many people, who may not be religious in the conventional sense, to believe in an enchanted world."

Finally, the prize for a book intended to for an academic audience went to a young German academic, Dr Silke Gülker, for her book on Transcendence in Science: Studies in Stem Cell Research in Germany and the USA.
"The book arises from fieldwork, using an anthropological methodology in which academic theologians embed themselves in scientific laboratories. They try to understand as deeply as possible what researchers are trying to do, how they go about it, and what sense they make of their research. Gülker embedded herself in two laboratories doing research on stem cells, and studied how the scientists she was working with grappled with ‘transcendence’, i.e. with how they pushed the boundary of what was perceptible and available, and reached beyond. This is a fascinating study of how research scientists are grappling with transcendence at the cutting edge of their research."

All three books frame religion in a broader sense than adherence to established faiths, according to Watts.
"Fuentes is concerned with the tendency for humans to form passionate commitments, of which organised religion is one manifestation. White is concerned with the enchanted world of fantasy-fiction. Gülker is concerned with the implicit grappling with issues about transcendence in research laboratories. All this reflects the time in which we live, in which sociologists are increasingly recognizing how many people are ‘spiritual but not religious’. Current books on science and religion reflect that new climate."
Posted by John Farrell at 8:58 AM No comments:

Lisa Beth Kovetz and I on the latest segment posted now at YouTube. Lisa Beth is a great host and it was a lot of fun seeing all the different movie clips she worked into our discussion.

Posted by John Farrell at 2:21 PM No comments: