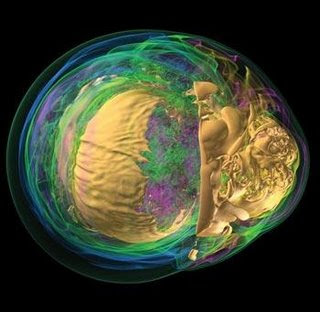 Interesting new study on how the explosion of a star influences its leftover pulsar.

"In 2007, computer simulations suggested that the stars don't explode in perfectly smooth spheres (J. M. Blondin and A. Mezzacappa Nature 445, 58–60; 2007). This latest visualization, created by Hongfeng Yu, a computer scientist at Sandia National Laboratories in Livermore, California, shows the entropy of the gases in the dying star's core, revealing the immense swirling currents that originated as tiny perturbations (gases with the highest entropy are yellow, followed by green and then purple). The currents "spin up the proto-neutron star, just like pulling a string on an old spinning top", says Bronson Messer, an astrophysicist at Oak Ridge National Laboratory in Tennessee, who contributed to the research. The work incorporates a new visualization technique, developed at Argonne National Laboratory outside Chicago, Illinois, which runs and visualizes the simulation directly on a Blue Gene/P supercomputer."