This is brutal.
Amy Welborn has posted about the report on the abuse of children in the Irish Catholic Church. This footage brings it home more starkly than anything else.

Posted by John Farrell at 7:11 PM No comments:

To clear the ground, [Linden] traces the process by which the Church, once notorious for the slogan “error has no rights”, began a rapprochement with the contemporary world in the Second Vatican Council (1962–5), and recovered long-buried strands of its own tradition in the process. Linden gives us a dialectical tour d’horizon, in which apparently contradictory notions are shown to reflect significant portions of the truth. Do liberal democracy and science itself owe far more to theology than many secularists realize? Yes. But was nineteenth-century secularism a necessary corrective to ecclesiastical and other forms of unaccountable authority? Certainly. Did Vatican intransigence greatly intensify because of the aggressively anti-Catholic policies seen in Bismarck’s Kulturkampf, for example, and under France’s Third Republic? Yes. Was Pius XII right to judge that Hitler’s anti-Stalinist credentials constituted a virtue that outweighed his vices? No, but that judgement is easier to make in hindsight. Similar kinds of consideration apply to internal debate between Christians. A Protestant view of the papacy is likely to concentrate on the damaging effects of Vatican authoritarianism. As is often pointed out, the absolute power enjoyed by popes over the past 150 years was only made possible by the railways. Before the spread of modern communications, ideas about the universal reach of papal jurisdiction could be more a matter of theory than of practice. On the other hand, Catholics might reply with some justice that a major part of papal history in recent centuries has consisted in a necessary and reasonably effective bid to protect the Church from secular interference. The example of Russia and other Orthodox countries, where religion has long been locked in a suffocating embrace with nationalist forces, goes some way to vindicating Vatican policy.

I had not seen this before. Ken Miller reduces Christopher Hitchens to namecalling in place of actual argument. Good for Ken.

It might be time for Hitch to take a break, head to warmer climes and drink himself shapeless. Maybe he'll be surprised by what he finds when he wakes up.
Posted by John Farrell at 12:14 PM 2 comments: 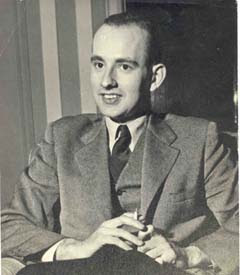 10 Years Ago Today...
Professor William Alfred, who probably influenced me more than any other teacher I've had, passed away on May 20th. This small clip is from an evening of poetry he hosted at Harvard's Memorial Hall, with Stockard Channging and Bill Murray. Tommy Lee Jones was also one of his famous pupils, and it may be just a coincidence I saw him at Fenway Park tonight. Perhaps he is in town for a memorial service or other gathering for Bill Alfred.


There's a nice bio of Bill at Brooklyn College's Collection:

During his long years of association with Harvard University, Alfred developed close relationships with colleagues such as Elizabeth Bishop, Seamus Heaney, Mason Hammond, Robert Lowell, Archibald MacLeish, and many others. However, Alfred also made friends outside of his coterie at Harvard. He developed a close relationship and corresponded frequently with Robert Lowell, Lillian Hellman, Lillian Ross, and Faye Dunaway.

As a student, Alfred had taken a creative writing course with MacLeish, and wrote Agamemnon, a modern-day version of the Aeschylus tragedy, published in 1954. His most famous play, Hogan's Goat, was begun in 1956 while he was living in London on the money he had been awarded for the Amy Lowell Traveling Poetry Fellowship. Alfred, when queried as to why he preferred to write plays, admitted that he " ... didn't have the patience to write novels ... verse is an easy measure to build up a scene with.” He said verse drama "provided a sense of heightened tempo ... I had more control of timing." Alfred's in-depth research was obvious in his plays. Archibald MacLeish advised him that "the fellow who wants his play to stand up in front of all types of audiences everywhere must take the time and the patience to do a complete file on every character he intends to use."

Alfred began as a medievalist scholar at Harvard and went on to teach English Literature, drama, poetry, and screenwriting. His class on Beowulf was legendary. Alfred was known to generations of students simply as professor. Not only was he an excellent educator but he mentored an untold number of students. He had the ability to develop a special rapport with each and every one. "Alfred befriended more Harvard undergraduates than any teacher in the school's history," said Robert Brustein, director of The American Repertory Theatre at Yale.

And my classmate Rex Dean put together this nice video trubute to him.

Posted by John Farrell at 9:41 PM No comments:

Email ThisBlogThis!Share to TwitterShare to FacebookShare to Pinterest
The Problem with Maureen Dowd
Dan Kennedy pretty much nails it. It's not the plagiarism, it's rather what we've learned about how she works. Or rather, doesn't work.
Posted by John Farrell at 9:03 AM No comments:

Email ThisBlogThis!Share to TwitterShare to FacebookShare to Pinterest
John Wilkins has an interesting post on the problems that philosophers have had with evolution:

Posted by John Farrell at 8:46 AM No comments:

Brad Gooch's new biography of Flannery O'Connor is reviewed for the Atlantic by Joseph O'Neill. It looks like a fascinating book, and one I'm planning to add to my list. I was struck in particular by this:

O’Connor was a fervent Roman Catholic—a “thirteenth century” Catholic, as she described herself. She read deeply into theology, with a special interest in Teilhard de Chardin. She went to Mass every day she could, invariably accompanied by her mother. Flannery and Regina’s claustrophobic, mutually dependent relationship was inevitably vexing for both women—and mortifying for the daughter when the mother revealed to visitors her own less than edified social attitudes. These domestic circumstances, in combination with Flannery’s religiosity and visibly worsening health, hardly form a propitious setup for a gentleman caller. But one did materialize. In 1953, she began to receive visits from Erik Langkjaer, a handsome, thoughtful Dane whose work as a college-textbook salesman regularly brought him to the Milledgeville area. The friendship became, Gooch writes, “at least tinged with romance.” On a drive together, they shared a fateful kiss. Langkjaer, in one of the biography’s most powerful passages, remembers this:

She had no real muscle tension in her mouth, a result being that my own lips touched her teeth rather than lips, and this gave me an unhappy feeling of a sort of memento mori, and so the kissing stopped … I had a feeling of kissing a skeleton, and in that sense it was a shocking experience.

It is very hard, reading this kind of thing, not to feel great sympathy for O’Connor and mix the feeling into one’s evaluation of her work. She herself would have rejected such a mixture. “My lupus has no business in literary considerations,” she maintained. This was true not only for critics but for the writer herself. O’Connor’s fiction gives few signs of her disease. Wise Blood was more or less completed before the diagnosis, and her subsequent writing obviously was cut from the same pre-lupine bolt of obsessions.

Posted by John Farrell at 10:57 AM No comments:

Anthony Lane has some serious fun with the new Star Trek movie.

Here, in other words, is a long-range backstory—a device that, in the Hollywood of recent times, has grown from an option to a fetish. I lost patience with “Charlie and the Chocolate Factory” once we learned of Willy Wonka’s primal trauma (his father was a dentist, and forbade him candies, so guess how he reversed that deprivation?), and, likewise, with “Batman Begins,” from the moment that mini-Bruce tumbled into a well full of bats. What’s wrong with “Batman Is” ? In all narratives, there is a beauty to the merely given, as the narrator does us the honor of trusting that we will take it for granted. Conversely, there is something offensive in the implication that we might resent that pact, and, like plaintive children, demand to have everything explained. Shakespeare could have kicked off with a flashback in which the infant Hamlet is seen wailing with indecision as to which of Gertrude’s breasts he should latch onto, but would it really have helped us to grasp the dithering prince? Or, to update the question: I know it’s not great when your dad dies a total hero and leaves you orphaned at the same time, but did James T. Kirk have to grow up such a cocky son of a gun?

Spot on.
Posted by John Farrell at 6:37 AM No comments:

Superb video on PCR and electrophoresis.

Posted by John Farrell at 1:32 PM No comments:

Calling Jerry Coyne's Bluff
Steve Matheson does a nice job explaining the problem with 'theistic evolution', and therein I think nicely shows why Coyne's attacks on accomodationism really amount to nothing more than attacks on fellow scientists who are religious.
Posted by John Farrell at 10:25 AM No comments:

Email ThisBlogThis!Share to TwitterShare to FacebookShare to Pinterest
Labels: evolution, science education
Comic Break: This is my kind of burger joint:

How sloppy is the Boston Globe getting?
Check out this whopper in Heller McAlpin's book review of Christopher Buckley's Losing Mum and Pup.

Second, his only son, Christopher, came out in a Daily Beast column this past fall with, "Sorry, Dad, I'm Voting for Obama" - a defection that led to his readily accepted resignation from the New Republic, the conservative magazine his father started in 1955 and for which dad wrote 5,600 columns.

The New Republic? Conservative magazine founded by William F. Buckley? The only journalists I can think of who might be unaware of the difference between National Review and the New Republic, are, I'm guessing, still writing for the junior high school newspaper.

Seriously: I guess the editors at the Globe are too worried about keeping their jobs to actually do their jobs.

[Brought to you by the same crowd who put a dead dog on the front page before Nobel laureate Hans Bethe.]

Update: The Globe has corrected the gaffe.