Unlike me, John Wilkins seems utterly incapable of writing even one frivolous post. He's been on a tear lately with some great essays on Darwin, and this one is no exception.
Posted by John Farrell at 2:19 PM No comments:

Looks like the Jesuits planning the upcoming Vatican conference on Darwin and evolution are planning to give 'Intelligent Design' all the consideration it truly deserves.
Posted by John Farrell at 9:58 AM No comments:

To commemorate Darwin on the 200th anniversary of his birth, I'm going to follow Allen MacNeill's lead and recall these words from his classic:

Authors of the highest eminence seem to be fully satisfied with the view that each species has been independently created. To my mind it accords better with what we know of the laws impressed on matter by the Creator, that the production and extinction of the past and present inhabitants of the world should have been due to secondary causes, like those determining the birth and death of the individual.

I like to think Aquinas and Darwin would have enjoyed each other's company.
Posted by John Farrell at 1:41 PM 2 comments:

Steve Matheson does some quick and telling research showing why working biologists actually don't preoccupy themselves with 'darwinism' and 'darwinian' ...as much as creationists do.

It's a science thing.
Posted by John Farrell at 12:01 PM No comments:

Can You See the Straw Man?
Atheist arguments for the alleged irreconcilability of faith and reason are often based on, shall we say, faulty presuppositions. Case in point: Jason and his readers are applauding Jerry Coyne's negative review of the books by Ken Miller and Karl Giberson. Like most materialists, Coyne has constructed a straw man argument to make his point and none of his fans have noticed.

Brandon does such a good job deconstructing Coyne, I'm going to quote him at length:

I always cringe when I find someone about to launch into that subject, because ten to one I'm about to be subjected to the combined irritations of pedantry and inability to think through the ramifications of the argument put forward. And there's some of that here, too, although I've come across much worse. But Coyne's argument seems shot through with a more serious set of flaws. This is Coyne's characterization of creationism:

But regardless of their views, all creationists share four traits. First, they devoutly believe in God. No surprise there, except to those who think that ID has a secular basis. Second, they claim that God miraculously intervened in the development of life, either creating every species from scratch or intruding from time to time in an otherwise Darwinian process. Third, they agree that one of these interventions was the creation of humans, who could not have evolved from apelike ancestors. This, of course, reflects the Judeo-Christian view that humans were created in God's image. Fourth, they all adhere to a particular argument called "irreducible complexity." This is the idea that some species, or some features of some species, are too complex to have evolved in a Darwinian manner, and must therefore have been designed by God. Blood clotting in vertebrates, for example, is a complex sequence of enzyme reactions, involving twenty proteins that interact to produce the final clot. If any were missing, the blood would not clot. How could something this sophisticated have blindly evolved?

His argument requires that these four be necessary and sufficient conditions. If they are not necessary then (1) his claim that they apply to all creationists (Coyne makes no distinction between the terms 'creationists' and 'intelligent design proponents') is false; and (2) he can't make his 'convergence' argument later on, at least in a way where it still remains clearly relevant (since, no doubt, everyone including Coyne himself 'converges' with the views of creationists on irrelevant points). If they are not sufficient, he can't make his 'convergence' argument, either, since they wouldn't suffice to make the general claims about religion that he gets out of that argument. But they definitely are not necessary conditions; I've personally met IDers who are pantheists and would firmly reject (2). This requires little to no modification of standard ID arguments; they just take the intelligence to be built-in rather than distinct. And even if such people did not exist, we know that (2) & (3) are not logically necessary to the position because standard ID arguments are consistent with the position of Hume's Philo in Dialogues Concerning Natural Religion, who holds that there is an intelligent designing principle of some sort, who knows what, that one could call 'God' if one felt the need. Thus if (as is plausible) (2) and (3) are commonly accepted by IDers, this is more reasonably explained in sociological terms than in terms of the position itself. Likewise, Coyne never considers that someone like Miller might well consider his later convergence argument to be itself a proof that these are not sufficient conditions, i.e.: Miller's not an IDer (because his conception of science is not the same, whatever his convergence on 'religion' -- which Miller, of course, would not grant is quite so close as Coyne thinks, in part because I don't think he would understand the term in the same way), so if Coyne's characterization of ID makes it difficult to distinguish Miller from it, this is due to the failure of Coyne's characterization to draw essential distinctions. And it is noteworthy that, despite the fact that Coyne recognizes the essential issue is how science is to be understood (devoting a considerable portion of the essay to the question), out of these four conditions only (4) even reaches the vicinity of giving us any inkling of what the creationist view of science is -- and it doesn't give us all that much of an inkling, either.

Thus the conclusion Coyne reaches is not surprising at all; given the way that Coyne has set up the problem -- ID is contrary to science, ID is accounted for in purely 'religious' terms, 'religion' generally converges on ID as accounted for in such a way -- the conclusion derived is virtually inevitable. But the set-up of the problem is so artificial that one suspects it was derived from the conclusion to be reached rather than vice versa. That is, the essay works very well if it is taken to be an account of how someone might find claims about the incompatibility of science and 'religion' (however the latter is understood) plausible; if taken as an actual argument for that conclusion, however, it is poorly constructed, since it begs the question early on. We get the conclusion Coyne believes, in nice detail, but we never actually see any sustainable argument for it.

Posted by John Farrell at 1:52 PM No comments: 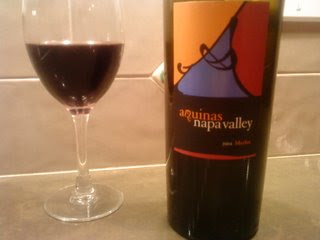 Adult Beverages Dept.
Here's a name of good omen (for those of you so metaphysically inclined). I found this at Marty's, opposite the Whole Foods in Newtonville. A nice merlot for Sunday or any other occasion. Not too sweet.
Posted by John Farrell at 6:19 PM No comments:

Max Borders on the Think Tank Bubble. (If there's anything serious conservatives don't need if they want to revitalize the movement, it's more think tanks.)
Posted by John Farrell at 2:56 PM No comments:

I've never met Amy Welborn, but we've been email/blogger buddies for a couple of years. She's a hard working author and mother.

Today comes the terrible news that her husband collapsed and died suddenly.

Keep her and her children in your thoughts and prayers.
Posted by John Farrell at 8:35 AM No comments:

This is inspiring. Listen to movie star Christian Bale go on an obscenity filled tirade over a director of photography (not exactly a low-on-the-totem-pole professional) after he accidentally interrupted a take. And the servile apologies from the poor guy and the director.

Unbelievable. Anyone remember if Errol Flynn ever behaved like this? Or John Wayne? Or Laurence Olivier?

I wonder if being unemployable for a few months would wake this guy up.
Posted by John Farrell at 3:52 PM 2 comments:

Perhaps there's some irony in all of this:

The equity firms sold in 2006 to Riverdeep Group of Dublin, a $392 million educational software company (since reincorporated in the Cayman Islands) that was controlled by O'Callaghan, for $3.4 billion. Like Messier, O'Callaghan was on a spree, with other people's money. He borrowed most of it from Credit Suisse and Citigroup, along with other investors. A year later, he bought Florida-based Harcourt, which has educational and trade lines much like Houghton Mifflin's, from British-Dutch publishing giant Reed Elsevier. The price: about $4 billion, also mostly borrowed from Credit Suisse and Citigroup, as well as since-collapsed Lehman Brothers.