The Darwin/Chicago Conference opened last night, featuring keynote presentations discussing current topics in evolution to mark (among other anniversaries) the 150th anniversary of Darwin's Origin of Species. Coverage of the opening discussions was provided via this neat new tool, Cover-It Live.
Posted by John Farrell at 11:33 AM No comments:

Interesting article on the real origins of Halloween:

During the penal period of the 1500s to the 1700s in England, Catholics had no legal rights. They could not hold office and were subject to fines, jail and heavy taxes. It was a capital offense to say Mass, and hundreds of priests were martyred.

Occasionally, English Catholics resisted, sometimes foolishly. One of the most foolish acts of resistance was a plot to blow up the Protestant King James I and his Parliament with gunpowder. This was supposed to trigger a Catholic uprising against their oppressors. The ill-conceived Gunpowder Plot was foiled on Nov. 5, 1605, when the man guarding the gunpowder, a reckless convert named Guy Fawkes, was captured and arrested. He was hanged; the plot fizzled.

Nov. 5, Guy Fawkes’ Day, became a great celebration in England, and so it remains. During the penal periods, bands of revelers would put on masks and visit local Catholics in the dead of night, demanding beer and cakes for their celebration: trick or treat!

Guy Fawkes’ Day arrived in the American colonies with the first English settlers. But, buy the time of the American Revolution, old King James and Guy Fawkes had pretty much been forgotten. Trick or treat, though, was too much fun to give up, so eventually it moved to Oct. 31, the day of the Irish-French masquerade. And in America, trick or treat wasn’t limited to Catholics.

The mixture of various immigrant traditions we know as Halloween had become a fixture in the Unites States by the early 1800s. To this day, it remains unknown in Europe, even in the countries from which some of the customs originated.

Trick or Treat.
Posted by John Farrell at 8:46 AM 2 comments:

Okay, you're a physicist. And lately, you haven't been sleeping very well.

The reason? Well, actually, there are several.
Posted by John Farrell at 11:06 AM No comments:

Philip Zelikow looks at some new books that grapple with the events of 1989 and after that led to the fall of communism.

In 1964, Burnham, the author of the nightmare vision that so provoked Orwell, was helping William F. Buckley edit the National Review. (Reagan would later award Burnham the Medal of Freedom.) At the time, Burnham's latest book had administered another powerful dose of pessimism. Titled Suicide of the West, in it Burnham argued that modern liberalism had lost the fervor of classical liberalism. The modern variant treated peace and security as equal to or greater than the commitment to preserving freedom. Since the focus on peace denigrated the use of power against a ruthless foe, Burnham predicted that the West was slowly committing suicide.

History dealt Burnham's argument a strange hand. He would be pleased to see that a belief in defending the West was a factor in the American and European revival. But the positive, dynamic ideal offered in Western European countries and Japan was so magnetic precisely because those countries seemed to be discarding their traditional reliance on force and hard power.

Posted by John Farrell at 8:06 AM No comments:

Superb video on how viruses get inside the body. Enough to make me head off for my flu shot right now....

Predictably, James Carroll can only interpret the Vatican's overtures to disaffected Anglicans in light of his own emotional hang ups. Fortunately Ross Douthat has not lost the use of his critical faculties and offers the more likely reasons behind Rome's strategy.
Posted by John Farrell at 12:49 PM No comments:

Massimo Pigliucci takes on the scope of skeptical inquiry. Russell Blackford has at him.
Posted by John Farrell at 12:04 PM No comments:

Tara Smith with a good post on the consequences of refusing to take vaccines.
Posted by John Farrell at 10:06 AM No comments:

Book Notes
I just got my copy of Richard Dawkins' The Greatest Show on Earth. I plan to do a few posts on it as the mood strikes me, or rather as something from the book stands out as I read it, rather than a general review.
Posted by John Farrell at 12:07 PM No comments:

Lee and Fleming
I knew Christopher Lee had a family connection to James Bond author Ian Fleming. What I didn't realize is that Lee's older sister worked with Fleming in naval intelligence during the war.


Posted by John Farrell at 2:16 PM No comments:

Publisher's Lunch sends along the latest from the Online Book Price Wars.

This morning Sears offered their own twist on the discounts. Buy an "eligible book" at tempting discount from Sears.com or their competitors at Target.com, Walmart.com and Amazon.com and e-mail the receipt to Sears and they will give customers a $9 credit at Sears.com for any merchandise "so it's like getting the books for free." SVP for Online at Sears Holdings Imran Jooma, says, "We believe this program will benefit the thousands of customers who buy books every day by putting more money into their pockets." Called Keep America Reading, they are promoting it on the Sears.com home page. Cleverly, while Sears is highlighting the same ten forthcoming November releases as their competitors, from their own site they are listing all the titles for $17.98 (tempting consumers to help the other sites lose money on the book sales and then coem over and buy something else from Sears.com to use the extra credit.)

And Barnes & Noble's afternoon media event suffered another pre-announcement leak--this time from the bookseller itself. An ad in next Sunday's NYT Book Review touts their new ereader, called the Nook, and priced to match Kindle at $259.

Posted by John Farrell at 11:47 AM No comments:

Joe Thornton responds to the latest inanities from Michael Behe and the Discovery Institute.
Posted by John Farrell at 3:39 PM No comments:

No more B. Dalton

After closing 35 to 40 B. Dalton stores annually for years now, Barnes & Noble is preparing to shutter the last remaining group of 50 Dalton outlets. Spokesperson Carolyn Brown notes, "These are small-format, low-volume stores in malls and their leases are expiring." All but two B. Dalton stores will be closed within the next few months, with branches in Washington, DC and Roosevelt Field, Long Island remaining open until their leases expire. Brown says some "booksellers will be offered a chance to move to Barnes & Noble stores in the cases where there are Barnes & Noble stores near the B. Dalton's which are closing" and "others will be given generous severance packages." She declined to indicate how many positions will be eliminated as a result of the store closings.

The B. Dalton's are all "small, low-volume" mall stores, but Brown underscores that "we are still very committed to the mall business; about 75 percent of our new Barnes & Noble stores are in malls."

Posted by John Farrell at 12:07 PM No comments:

File this one under the No sh%t, really? Dept.
Posted by John Farrell at 11:05 AM No comments:

The latest Twitter idiocy....
Posted by John Farrell at 8:27 AM No comments:

Nice post by Lab Rat on how to destroy a bacterial cell wall.

I'm with Jay Fitzgerald on this one:

Hub Blog gets my own kick out of theories about why American cooking has historically sucked over the years (industrialization etc.). But has anyone stopped to think it might have to do with the nation being founded by the descendants of Europe’s worst cooks, i.e. the English? That the English were followed to America by the world’s second and third worst cooks, i.e. the Irish and Germans? C’mon. Durgin Park didn’t spring from nowhere. …

Posted by John Farrell at 7:38 AM No comments:

A look at Monetization and Video Advertising Online

Posted by John Farrell at 3:27 PM No comments:

It already seems like months since I was down in Argentina. But here's a little composite of some video I shot during a hike up the "Ventana" with two colleagues on our day off. The Sierra de la Ventana is about 500 kilometers south of Buenos Aires, and at the time we were there (mid September), Spring was just around the corner....

Posted by John Farrell at 7:30 AM No comments:

Apropos the news about Ardipithecus, you just knew some moronic statements were going to issue from the PR maw of the Discovery Institute. Predictably, they do not disappoint....
Posted by John Farrell at 11:05 AM No comments:

Looks like Jay Fitzgerald and I both finished Sam Tanenhaus's book at the same time. He also beat me to a review...which I pretty much agree with.
Posted by John Farrell at 10:51 AM No comments:

Larry Moran, worth quoting in full:

Why is this a problem? It's a problem because Bill Maher is a kook. He believes in all kinds of strange things about alternative medicine, cancer, and immunizations.

PZ Myers will be at the convention. His attempt to defend Maher and Dawkins isn't working, in my opinion. Orac takes him on and exposes the hyprocrisy of the whole sorry episode. Maybe there will be fireworks at the convention tomorrow? I sure hope so. Giving the Richard Dawkins Award to Bill Maher is a travesty.

The fascinating find of the oldest hominid skeleton so far prompts a new evaluation of human evolution:

The new fossils of Ardipithecus ramidus — known as 'Ardi' — offer the first substantial view of the biology of a species close to the time of the last common ancestor, estimated to be at least 6 million years ago. Like modern humans, Ardi could walk upright and didn't use her arms for walking, as chimps do. Still, she retains a primitive big toe that could grasp a tree like an ape.

Previously, the oldest near-complete skeleton of a human ancestor was the 3.2-million-year-old Australopithecus afarensis skeleton known as Lucy, also from Ethiopia. Because Lucy had many traits in common with modern humans, she didn't provide much of a picture of the earlier lineage between apes and humans, says Alan Walker, a biological anthropologist at Pennsylvania State University in University Park. The new A. ramidus does.

Posted by John Farrell at 12:02 PM No comments: 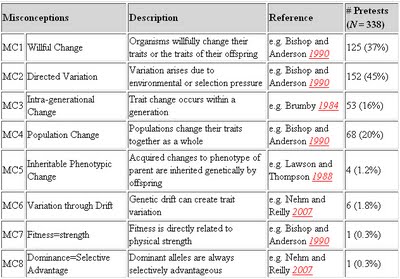 (click on the picture to make clearer)
Posted by John Farrell at 10:16 AM No comments: